This is the oldest and original Albariño producer whose small, modern winery was custom-sized to fit into the ancient granite cloisters of this grand old Renaissance palace built in the first few years of the 17th Century that dominates the central square of Cambados - capital of the Salnés Valley - and still in the hands of the original family.

Fronted by the charming Juan Gil – aka the Marqués de Figueroa - urbane yachtsman and aristocrat, Palacio de Fefinanes was the first ever producer to bottle Albariño, in 1928, and given its finesse and delicacy it is regarded by many as a benchmark. Approximately 150,000 bottles are produced.

The fruit comes from a historical repertoire of quality local growers consisting of some 66 families, whose soils are sandy but with elements of lime and clay, and of high acidity, the result of decomposed granite; and usually shallow, over an underlying impermeable layer be it of rock or clay. The vineyards are grown at heights not much above sea-level, some very close to the ría; and for this reason frosts are extremely rare as the climate is warm, damp and Atlantic with an average rainfall of about 1500 ml. It should be noted, however, that most of this rain falls during the winter months, and that the summers tend to be very dry, which, together with the splendid sunshine, allows the grapes to ripen most satisfactorily.

The harvest traditionally takes place during the last 10 days of September. Given so many small parcels, the vines – all trained on trellises – are aged between 8 and 80, with an average of over 40 but some well over a hundred; with the root-stocks for many of these vineyards coming from the Palace's oldest vines. Plantation density is also widely variable, although 625 vines to the hectare is regarded as the norm, given that as a result of the 'minifundio' system of land tenure very few individual properties amount to even a single hectare and though the vines are universally trellised they follow no standard system.

Winemaking: further to destalking, the grapes are introduced whole into pneumatic Wilmes presses; after which the chilled musts are left to precipitate solids for between 24 and 48 hours. There is no maceration; and fermentation is effected in 8000 litre stainless steel tanks on the basis of natural/wild yeasts at 16C for 15 to 20 days.

Three wines are made: the straightforward, young Palacio de Fefiñanes, which is not usually bottled until March and is light, delicate, and exceptionally fragrant with floral and appley overtones – invariably winning international Awards thanks to its atypical delicacy; PdF1583, which is tangy and upbeat yet surprisingly delicate, part steel and part barrel fermented to then spend some 5 months in predominantly French oak; and PdF III Año, which is a single, select tank made from grapes pre selected in the vineyards and left on its lees for around a year – resulting in a consummately delicate but grippier and more substantial wine with delicious mandarine and limelike qualities. 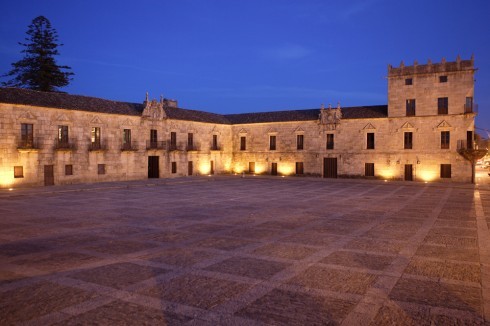