A long story, Cianfagna, so stay tuned.  It’s Vinitaly 2008 and I’m half-dead after endless meetings, tastings, dinners and the inevitable chaos with too many people and too few hotel rooms.  Monday is always the last day of the fair and it’s also the quietest, the day I usually reserve for catching up with producers.  Paola Brini and her husband, Francesco, are treating me to my fifteenth espresso of the day when onto the stand wanders a man who could best be described as being in some distress.

Vincenzo Cianfagna, as it turns out, had decided to pack Vinitaly into the week before his wedding and was, not surprisingly, never in the right place according to everyone who had been bothered to offer an opinion.  As you can imagine, Francesco and I immediately offered our sympathies for having such an unsympathetic bride-to-be and Paola began to berate him anew for exhibiting such exquisite lack of judgement.  So, instead of just one couple rowing there were now two, and I, in an inspired fit of peacekeeping, suggested that we have a glass of wine.

In no time at all Vincenzo had produced a bottle of his Tintilia and I was in love.  Not with the bride-to-be I hasten to add but with this, most bizarre of grape varieties.  Originally from Spain, there are fewer than 100 hectares still cultivated.  A great shame as this vibrant, aromatic, and profoundly artisanal wine is another example of why I’ll never tire of Italy.  Since you ask, the wedding went off without a hitch, they are happily married and our first order was dispatched the day they arrived home from their honeymoon. 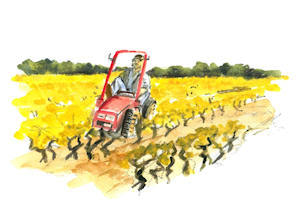