We have had the pleasure of working with Marinella Camerani for more than a decade. During this time her hard work and determination have ensured the wines’ steady refinement and a string of accolades for Marinella. Corte Sant’Alda has emerged from Valpolicella’s backwaters to take centre stage amongst the region’s most celebrated producers. The estate’s quiet transformation is mirrored in Marinella herself who, whilst still unassuming, now speaks with the quiet confidence of one who has spent years living on nothing but the courage of her convictions. No one is more deserving of success.

The estate suffered a savage hail-storm in both 2005 and 2007 which necessitated a round of significant price increases.  It’s proof of the attachment everyone feels for Marinella that sales actually grew last year after the release of what are unquestionably her finest wines to date.  The 2009 ‘Ca Fiui’ is sourced from parcels of young vines trained either on Gobelet or on Single Guyot.  Fermentation for all the wines is in upright wooden tini and all are hand-plunged.  It’s a concentrated and vibrant Valpolicella with bright, red cherry character.

The harvest is entirely by hand and Marinella is one of the few remaining producers to continue the ancient practice of air-drying all the grapes used in the Amarone and the Recioto.  Air conditioners are both quicker and more reliable as they preclude the possibility of rot spreading through the grapes.  Leaving the bunches to dry naturally takes time and the grapes need to be scrupulously healthy if the risk of rot is to be avoided.  All 35 tons of fruit used in Marinella’s passito have had the rotten berries removed.  One by one.  It’s no wonder only Marinella persists with this absurdly time-consuming process but the slow desiccation results in complexity rather than just concentration.

Her 2006 Recioto makes one wish the process was more widespread.  I hadn’t thought it possible to make a red wine that sports 15% alcohol and 90 grams per litre residual sugar without recourse to fortification.  Extraordinary stuff and the only wine that could make her indomitable 2006 Amarone seem effete.  At 15.5% it’s gorgeously off-dry in the Amandorlato style but with the acidity and tannins that so many lack.  Balance is a word that applies as much to the wines as it does to Marinella’s subtle interpretation of this region’s classic terroir.  In 2008 Gambero Rosso crowned her ‘Winemaker of the Year’, a fitting accolade for a woman whose vision and determination have established this estate at the forefront of Italian winemaking. 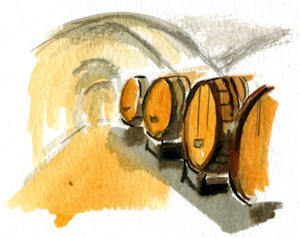